Having problems viewing the map? View in Google Maps App

Discover something new...more than 150 years in the making.

Discover something new...more than 150 years in the making. 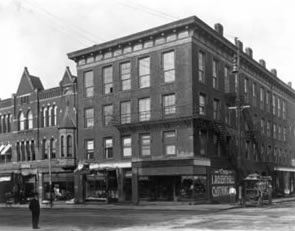 Research has shown that the Woodward is America's Oldest Authentic 19th Century Theater still standing (there are no original pre-19th century theaters in America).  Updated historical investigation has moved the first event back to at least December 8-10, 1851, which was a lecture on electricity by a Dr. Boynton.

Listed on the National Register of Historic Places on October 10, 1975, the Woodward Opera House is situated in the heart of Mount Vernon's Central Business District.  It was also listed as a contributing property to the Downtown Mount Vernon Historic District on February 3, 2012.  This national landmark invites you to step back in time to the mid-1800s and experience history! While viewing the Woodward, imagine what it must have been like to perform here. Take in the 19th century architecture, admire the original paintings still hanging on the walls, and if you listen quietly, you may hear a fiddle or banjo picking out a familiar tune.

The Woodward was originally constructed by Dr. Ebenezer Woodward, and enterprising businessman in Mount Vernon.  His original intent was to provide Mount Vernon with a performing arts venue which would not depend solely on the theater revenue to sustain the building.  Dr. Woodward envisioned a commercial building suitable for housing large crowds for entertainment.  The genius of his plan has resulted in the preservation of this profound and unique structure.  The building has been continuously occupied by mercantile establishments on the first floor since its completion in 1851.  The second floor was occupied by professional and commercial ventures from the building's completion to the 1960s.  The third and fourth floor theater used for that purpose until the mid-1920s, when competition from other local theatrical and motion picture venues forced the Woodward Opera House to close its doors.  The third floor continued to see occasional use as a gymnasium and storage area of and on since that time.

Earlier performances such as vaudeville, minstrel shows, and other traveling shows during this time period showed that Knox County's citizens took great interest in a wide variety of artistic culture.  This inspired Dr. Woodward to lease the land at the southwest corner of South Main and West Vine Streets where he later erected the Woodward Hall. The doors were opened to the public by December, 1851. Thirty-two years after its debut event, a major remodeling took place to provide even more space and adjust structural problems so that the Woodward could adopt an even wider variety of artistic endeavors.

The Woodward Opera House is tied closely with local musician Dan Emmett who is known for his world famous song "Dixie," as well as "Old Dan Tucker," "Turkey in the Straw," and "Blue Tail Fly."  Another landmark performance that occurred at the Woodward was the first motion picture shown in Knox County during 1897-98.  The Woodward closed in the mid-1920s, that last verified event took place on February 22, 1921 with a lecture on new and improve uses of electricity, bringing the Woodward full circle.

The building next door, historically known as the Cooper Building/Rogers Block, will be included in the project as the Woodward Annex. The Cooper building was built in 1884 by C. G. Cooper, who founded what became Cooper-Bessemer Company and later Cooper Industries.  Cooper constructed the building on behalf of the late Colonel George Rogers, who bought the property in 1882, but died before construction began.  The first floor was historically retail, and the upper stories commercial space.  The second and third floor were commercial and office spaces, as well as residential through the 1960s.  This building is currently vacant for construction. 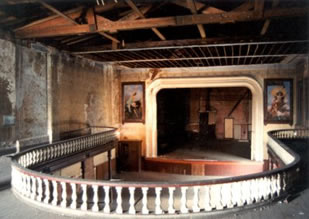 Efforts to bring the historical significance of the Woodward Opera House to the forefront began in the 1970s.  Many local organizations supported the cause during these early years, including the Knox County Renaissance Foundation.  The Woodward was placed on the National Register of Historic Places in 1975, and the eventual restoration became the dream of the community.

In 1994, The Knox Partnership for Arts & Culture (KPAC) was created.  Its mission was established to support the arts throughout Knox County, beginning with the restoration and operation of the Woodward as an arts facility.  In 1997, the Woodward Development Corporation (WDC) was formed to be the eventual owner of the facility.  WDC purchased the Woodward building in May of 1998 and the adjacent building for use as the Woodward Annex in March of 2000.  Both organizations applied for and subsequently achieved their IRS 501(c)(3) tax exempt designation.

After acquisition, WDC began detailed historic and archaeological research aimed at establishing the physical evolution of the structures to permit an authentic restoration process.  KPAC began laying the ground work developing plans for the community arts as it relates to the Woodward facility.

Read more about the project here. 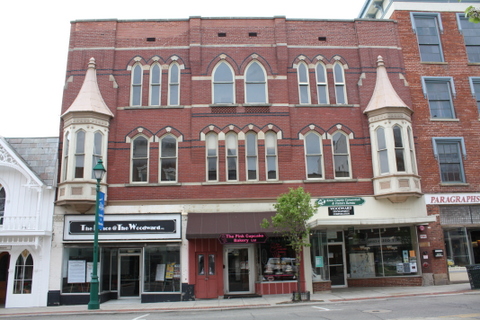 The Cooper Building/Rogers Block, renamed The Woodward Annex, was built in 1884.  It was constructed and owned by Charles Gray "C. G." Cooper, of the locally prominent Cooper family, as Trustee to the late Colonel George Rogers, of Civil War fame.  The Coopers owned a local industrial firm, which primarily manufactured steam engines.  This company has since become Cooper Industries, one of the leading international companies in engine and electrical motor manufacturing.

Colonel Rogers bought the property in 1882 to build a new mercantile building.  The previous wood frame buildings were in extreme disrepair and valueless.  Sadly, Colonel Rogers died before construction began.  In his will, Rogers made his brother-in-law and business partner, C. G. Cooper, Trustee of his estate and guardian of his wife and daughter.  When construction finally began in 1884, it was done under the direction of Cooper.  Although many referred to the building as the Rogers Block in honor of Colonel Rogers, ultimately the name Cooper Building stuck, as it was C. G. Cooper who made its construction happen.

The Annex's iconic triple gable parapets were were structurally damaged from a fire in a neighboring building sometime in the late-1940s or early 1950s, and were removed.  These gables will be reconstructed to bring the building back to its original Gothic Revival appearance.

In order to perform this action you have to login